Traveling home to Ireland from a holiday at home in Slovakia I’ve managed to open forgotten applications, dusting in my iPhone not open since I do not even remember, without expecting anything unusual.
Sitting in the train from Prešov to Bratislava running trough the night of Košice, browsing the Tumblr and reading brothers Strugacky’s ‘Понедельник начинается в субботу’, this body art creation, caught my immediate attention…curious as always I took an action at #reblog360… | the virtual spheres of the World Wide Web same as the Strugacky’s fantasy fiction novel blends the elements of freedom of the humans mind reality today, with the tools of artificial intelligence of tomorrow | it took less than 24 hours for a reaction on my reblog action to arrive into the Facebook corner of my virtuality when unexpected Miss Kenza Gupta, a French social worker with orphans aroset up in Košice und the world today asked me for friendship, to inject start her game of magic in my real world I checked her profile briefly and accepted, remembering my my yesterday’s action on Tumblr I made decision to continue and find out more, as the conversation developed I had mentioned my new contact to my missis, just to have some kind of cover when the sweet virtuality will hit my globally recognizable reality as soon as today. 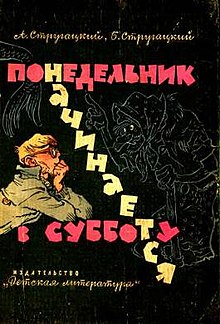 Monday Begins on Saturday (Russian: Понедельник начинается в субботу) is a 1965 science fiction / science fantasy novel by Boris and Arkady Strugatsky with illustrations by Yevgeniy Migunov. Set in a fictional town in northern Russia, where highly classified research in magic occurs, the novel is a satire of Soviet scientific research institutes, complete with an inept administration, a dishonest, show-horse professor, and numerous equipment failures. It offers an idealistic view of the scientific work ethic, as reflected in the title which suggests that the scientists’ weekends are nonexistent.

Brothers Strugacky set their satire reflecting not only the Soviet system expanding throughout the last century. Systems errors are leading to absurd RS situations in well developed democracies over the World Wide Web making the reality to become surreal as the Salvatore D. when the lover of infinity online overgrow into the living hell game of sophisticated mafia working quietly under the Big Brother eye today.

This site uses Akismet to reduce spam. Learn how your comment data is processed.